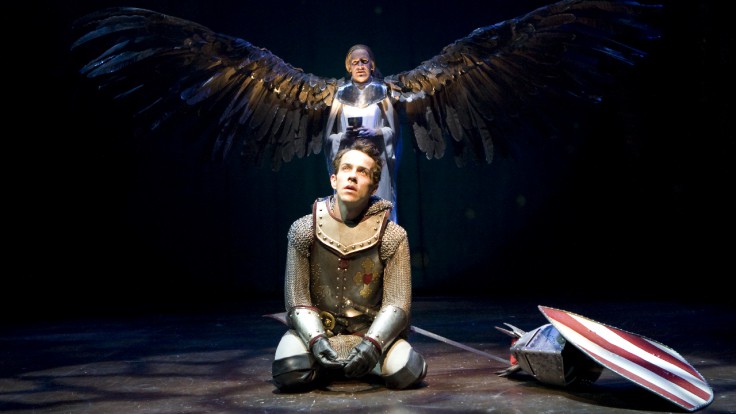 Jonjo plays Launcelot in Morte D’Arthur, which joined the repertoire at the Courtyard Theatre in Stratford-upon-Avon from 11 June to 28 August 2010.

‘Thomas Malory’s Morte D’Arthur tells ‘of the matter of England. Written during the violent years of the Wars of the Roses, it reflects its time.The story of King Arthur’s attempt to unite his country, blends myth and magic, from the sword in the stone to the establishment of the Round Table and the quest for the Holy Grail.

It traces the adultery of Lancelot and Guinevere, and ultimately the death of the ‘once and future king’. It is an often surprising and unexpected version of the familiar story, and the first great telling of the cycle in the English language.

Mike Poulton’s new version workshopped and developed by the ensemble under the direction of Chief Associate Director Gregory Doran, brings the story to the RSC stage for the first time. Gregory’s most recent productions include Love’s Labour’s Lost and Hamlet, which he has also directed for film to be broadcast on the BBC. His production of Twelfth Night transfers to London in December having opened at The Courtyard Theatre in October 2009. Mike Poulton’s last work for the RSC was his hugely popular 2005 adaptation of The Canterbury Tales’ (RSC, 2010)

Morte D’Arthur runs at The Courtyard Theatre in Stratford-upon-Avon from 11 June to 28 August 2010.